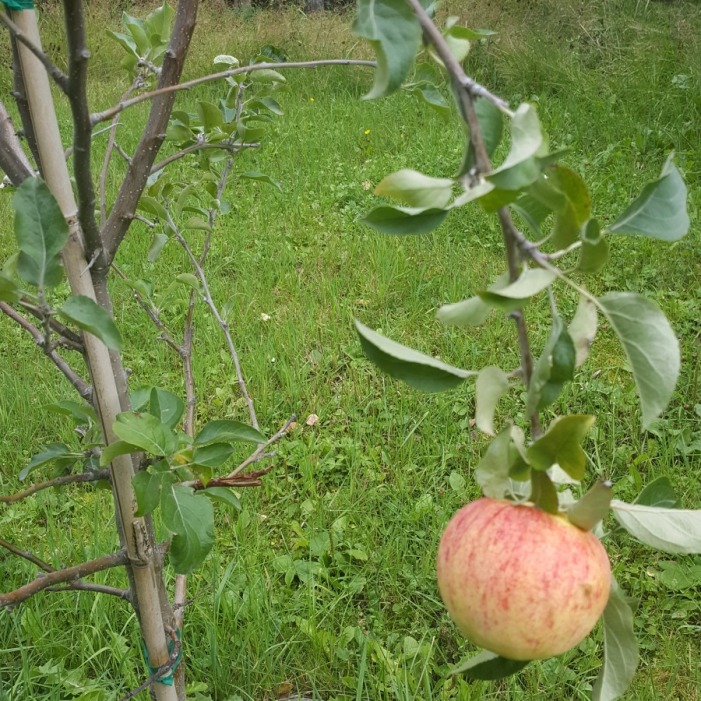 I love apples.  I really do.  So when it was decided that we should put a couple of fruit trees in our yard I immediately voted “apple!”.  Since my vote seems to carry a bit of weight sometimes, I further extended my influence to say “GOOD apples”.  I do not want any of those little balls of sour moose-turd flavoured “crab” apples littering up my lawn.  I want something delicious and worthy of the glorious apple name – like the ones that Saveon Foods grows in the warehouse.
Finally after much debate the votes were tallied and I was excited to learn that my apple vision had won out over lesser fruit hopefuls such as pears or plums: I was moving closer to my apple farming dream!  First step was obviously to buy an apple tree – no wait, we need two.  Apparently baby apples need a mommy and daddy tree.  Who knew?  Now I had to decide which two trees would be suitable, like some kind of strange organic matchmaker dating service.  I studied the pictures and descriptions on the tags and tried to envision their personalities but I have no idea what would make one apple tree attractive to another so it was mostly a guess.  Really all I had to go on was size and taste so it was hard to plan a deep relationship between the two – truth be told, a proverbial one night stand would suffice but I’m a romantic.
I proudly planted our new trees at what we figured was a proper distance – close enough to procreate but with enough space to hopefully not smother each other.  I wanted them to have a happy marriage.  Now I just had to wait – by next year I would be sitting on a giant pile of apples, like Scrooge McDuck with his money.
The following spring finally came and I waited for the leaves to bud and the apple blossoms to form… except they didn’t.   One of my two beautiful trees stayed grey and bare.  Apparently I had failed as a matchmaker and one of my trees decided death was preferable to creating juicy, delicious offspring with the partner I had selected for it.  Off to the grocery store I went to buy a bag of apples, while I contemplated this tragic turn of events.  The remaining tree was doing great although I couldn’t tell if it was actually joyous over the recent passing of its partner or if it was in deep despair and simply over compensating in an attempt to hide it’s depression.  Or perhaps I was over thinking the situation, but I doubt it.
Back I went to find a replacement tree, hoping against hope that I wouldn’t be too late for this growing season.  It was starting to seem like an awful long time since I had first dreamed of a mighty two tree orchard to keep my apple cravings satisfied and honestly some of the excitement had worn off.  There was a lot less time spent selecting a mate this time.  Their happiness mattered less and less to me by now so I picked a tree that looked cheap and easy.  I absolutely will never tell what I considered to be the parameters for this decision.
After a brief memorial ceremony that involved the fire pit and a match, the old tree was laid to rest and the new tree was in place, ready to do its thing.  It was a waiting game again.  The new tree had previously set blooms so I was told not to expect anything from this year.  Darn – another wasted season.  Luck was on my side however as one little bloom somehow managed to survive the move and hang on, slowly growing into a magnificent specimen of apple greatness.  The young tree was, of course, not ready to support this baby and the branch was pulled down in a horrifying bend reminiscent of the lone Christmas ornament on the Charlie Brown tree.  It seemed to grow slowly, likely because I checked on it several times a day, but my single lonely apple finally became ripe enough to pick and eat – and it was delicious!  I have to say that this was undoubtedly the most delightful apple I have ever tasted, and so it should be as I have totalled the costs of the original trees with the replacement tree and the trips to the store, fertilizer, dirt, stakes etc at a little over $300.  Since the average apple weighs about 150 grams this would put my apples value at approximately  $2100.00 per kilogram.  Or $140 per bite.   Take that, caviar!  I figure that has to be close to the most expensive apple in the world but I haven’t looked into it further. I am still waiting for Guinness to return my call.

As a side note,  it did not occur to me until later that the blossom was already present when I brought the replacement tree home which means my other tree was not even a part of producing this apple – but it seemed proud anyway.  Maybe it doesn’t know.

This is a text widget, which allows you to add text or HTML to your sidebar. You can use them to display text, links, images, HTML, or a combination of these. Edit them in the Widget section of the Customizer.
Loading Comments...
%d bloggers like this: